By David A. Wheatley
Other world events likely to bring relief now (www.bridges.academy/jupiterneptune.html) would be if Russia doesn’t invade Ukraine.
​Feb 1st was first day of The Year of The Tiger, and the Winter Olympics began on February 4th.  I would make a non-astrological guess that China asked Russia not to invade Ukraine leading up to and during the holidays and the Olympic games held in China. Those games end on February 20th. If Putin does not pull the trigger by the end of February, I doubt very much he will at all. If he does start an invasion of Ukraine, he will experience severe restrictions promised by President Biden and as indicated in his astrological chart by the transit of Saturn, the restrictions will last for years. 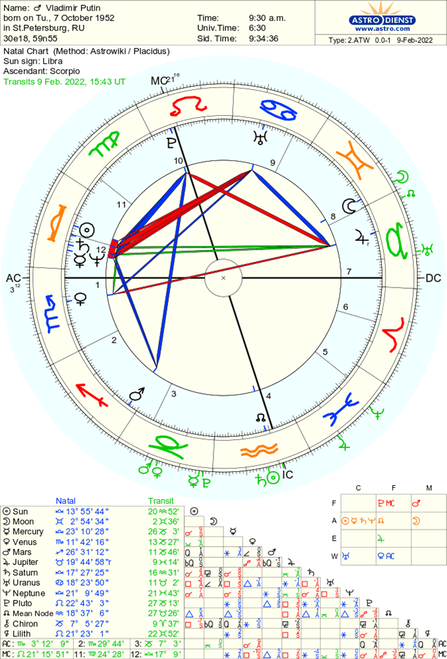 Vladmir Putin was born on October 7, 1952 in St Petersburg, Russia. His Sun sign is Libra but his Ascendant is Scorpio, a more stereotypical sign for a KGB agent.  Pluto sits on his Midheaven and conjunct the Moon’s South Nodes, all in a square to his natal Jupiter.
​
Natally, Pluto conjunct Putin’s South Node points to insecurities, fears, fear of the dark or unconscious (Pluto) against which some believe the best defense is to acquire power. And as this natal Pluto South Node is conjunct his Midheaven, Vladimir makes a career out of it. It’s easy to imagine this quality in someone with deep powerful unconscious fears needing to amass a lot of power to feel secure. But the South Nodes are also very karmic; one can’t outrun one’s shadow. While Putin has bent national power into personal power, there are so many ways he can and will fall victim to it eventually, even if in the most obvious unavoidable problem of mortality.

His natal Jupiter is about to be conjuncted by transiting Uranus and squared by transiting Saturn. The devices the psyche uses to trip action into motion in a chart are always in proportion to whatever is necessary. If only a small degree of stress is necessary, then that’s all that manifests. If the individual has a strong will and is accustomed to playing god then the stresses are going to be much greater. Unfortunately caught in the crosshairs of Putin’s psychological drama are millions of people in many countries.
Saturn will conjunct his North Nodes overlapping the same time frame and in doing so will also oppose his natal Pluto, all beginning in the coming weeks and lasting for two plus years. In my opinion this is Vladimir experiencing the fruits of his labors under a tremendous weight or challenge. Containing those stresses and the many surprises Uranus always brings will spill outside the lines of what he imagines is within his control.
As Saturn gets into a contest with his natal Pluto to survive under great pressure by opposition, Saturn squares his natal Jupiter:  to the harsh restrictions of Saturn, pressures are amplified beyond what he might have imagined. These pressures he endures heap much more stress on his nation and neighbors. He’s going to experience a crisis of structure (Saturn) growing outside his ability to manage it and although he undoubtedly has prepared extensively, problems will be magnified beyond what he imagined and prepared for.
Putin can adapt; he is very experienced at staging spy craft theater, a favored KGB method of manipulating. The pressures he will bring to the surface could sweep him away.  In time he will be gone anyway.
​
In pragmatic terms, it’s unlikely Putin would launch an invasion of Ukraine during the time the Olympics are being held in China.  I’m sure he has checked Xi’s calendar and it says hold off until our winter games are over. Don’t pee on the carpet. Meanwhile EU leaders and others attempt to persuade, scare or bribe Putin out of an invasion and he expects to get something in trade. Instead, accidentally, he is uniting NATO by giving them back the bogeyman to fear, followed by higher spending on weapons of war. Maybe NATO should offer Ukraine and any other former Soviet nation instant membership into NATO unless Putin withdraws.