By David A. Wheatley
In Astrology the idea persists that planets, moons, asteroids and the sun - all referred to as luminaries - cause us to act out in various ways and that because the movement of these bodies is on the clock, in fixed orbits, they are and we are predictable.
Life can be enhanced by knowing what to prepare for; our self awareness benefits. There’s a natural desire to make our lives at least partly predictable to establish a baseline for existence. It's in our psychological nature to benefit from repetition. Living in patterns of behavior accounts for some of the interest in Astrology, as in becoming more aware of our patterns. The predictability factor also provides an excuse for human behavior, for when we seek one. We can say we are being compelled by the angles these solar system planetary bodies form to each other.

Frankly it's overwhelming to comprehend the enormity of everything without a system to try and sort it out.  We can barely help ourselves, which slips into not being fully responsible because we are compelled by external forces. “Mars made me have an angry day. “ “Drivers are crazy on the full Moon.” “The position of Pluto is causing nightmares.” “I am helpless facing such forces, and have to find my way through it until this period ends.”  None of these statements are entirely accurate.

As we learn about the astrological patterns we are in, we can manage the process and the outcomes.

In ages past, human beings accepted the will of the gods as something we might have to struggle against if not succumb to. In the era of modern religions this fatalistic heavy explanation remains for some but has softened for others. This separation in perception - between having authority over your life or being a pawn of higher levels of consciousness - understandably varies for us all.  It's always been easier to accept the consequences of forces we cannot fully comprehend or control.  We look outward and upward for the deciding factors of our fate. 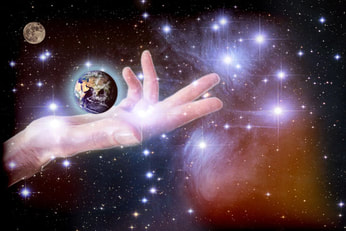 Our own role gets diminished when we fail to perceive that we are part of a whole psyche body.  We are more than just a physical body.
Our psyche is mapped out in the solar system and all the material in it. Our physical body lives within the psyche yet we feel it to be the opposite. We feel that the physical universe is the reality and the psyche is a separate dimension of it. This predisposes us to limit our definition of what we are, creating a separation attitude of things which are in fact very much connected. And it makes us believe that our brief lives on Earth even if we reincarnate are entering into reality from something unreal.

Most of us know that the field of energy commonly referred to as the aura extends beyond the body. Like the magnetic field around a planet it may be physically invisible, but it’s there.  If we see them either intuitively or by deduction, the properties in these energy fields educate us about the state of the individual as a whole being, not just a physical body. Energy fields are bodies too.
Thinking about ourselves as limited to the physical body is a thing of the past. We are more than that. When we work on our energy field we begin to become aware of subtle powerful influences to it and attempt to improve the quality of that energy field which includes the physical body, but begins with the attitude that we are beings of the psyche living in a body. When we do this we begin to accept greater responsibility for our state of health, including the physical body but not limited to it. Instead of drawing a line that says my influence ends at the edges of my physical body, we blur that line. We become part of a very subtle reality and begin to realize that we have more influence and management duties over our whole being not just the physical body.
We also have a psychic body to manage. If we choose to be only on the receiving end of whatever fate is ongoing in our lives, we lose opportunities to make better choices. If we allow ourselves to be abused it will continue. If we choose to make other choices and put our willful intentions behind those choices we can be much more, if not much healthier, in our whole psyche body.

The psyche is awake 24 hours a day. The physical brain that channels the psyche goes through a variety of functional modes per day, like different broadcast radio stations many of which we can tune in better with an improved antenna, or develop more like an athlete develops a physical skill. We become more conscious and develop broader perceptions by intuitive decision and by conscious intent.
The planets in the solar system R US.  We have components in our individual and collective multidimensional psyche out there in physical space. When we look at our Astrological chart, we have to look at it like a medical report that reviews all the organs of the body. The body is the psyche. These are all energy fields interacting. The broader reality of the psyche is not limited to the physical dimension. The physical size of the organs in the psyche body and the distance between them is faking your perceptions out if you believe that the size of the physical solar system is relevant to its multidimensional nature. Your physical yardstick can't measure outside this dimension. Use your psyche yardstick, in which there is no physical distance. The psyche is an energetic body existing in multiple dimensions.

Another natural tendency within patterned thinking is to look towards a singular factor as being eternally dominant. There's even a desire to make comprehension containable, and we know for example that simple observation is telling us that the Sun is responsible for all life as we know it.  While the Sun god is always watching over, other luminaries in the solar system often have much greater roles in our lives.  Sun sign astrology is weak tea compared to an individually rendered natal chart with birth time and place. In a natal chart we begin with a map that shows the Sun with a less dominant role, one factor of many.

Other planets in our psyche-body, in the solar system, are often far more influential than the Sun.  Other gods and goddesses in the pantheon often dominate over the Sun god.

Articles published in science journals reveal a study of why the Sun has its polar shift every eleven years. The Sun’s eleven year period is part of what is considered a predictable pattern. There are a great many people trying to discern how the Sun’s magnetic field changes affect our lives on Earth. The assumption is that something is happening within the Sun that then affects us here on Earth - earthquakes for example.  Some are attempting to attribute earthquakes on Earth directly to solar eruptions even though the frequency of occurrence is inconsistently coordinated.

A study has indicated that the Sun’s regular polar shift is not solely because of factors in the Sun, it’s something that is catalyzed by an alignment of Earth, Venus and Jupiter. The eleven year cycle of the Sun's polar flips is a result of interaction with the energy fields of planets.  The point is that one energy field influences the other, regardless of physical size.
Here are articles on the science:
https://phys.org/news/2016-10-link-solar-tidal-effects-venus.html

The magnetic fields of physical bodies within the solar system are comparable to our human body aura, and they are part of the whole psyche body or multi dimensional properties of each planet.

In terms of Astrology and our psyche-bodies, what happens when we integrate our comprehension that planets do not make us do anything?  It is the chemistry or alchemy between energy fields within our greater selves that spark influences. We do it to ourselves, no one and nothing is doing it to us. We only have to grow to understand this network of consciousness.  Not be victims of it.
David A. Wheatley, June 2021