Generational influences -
​like instruments in an orchestra over a musical score

We rely on a full natal chart with birth time and place to begin to grasp the map outline of the planetary psyche. We can add many abstract points to it, such as Midheaven, Ascendant, Descendant, Moon’s Nodes, and so on. We can also add Asteroids to a birth chart, as they are part of the solar system body.

Intentions Trying to Manifest In Our Lives – the Blueprint

​Natal positions of planets in signs and in houses give a blueprint that shows intentions trying to manifest in our lives. From points of origin in the abstract to eventual integration in our lives, adjustments to intent get made. Adjustments get made more in form than in substance most of the time, but we also frequently learn that what we believed to be our intentions were concealing hidden unconscious material with intentions we were not aware of. We are often too preoccupied living them out to be fully analytical about them, and sometimes not having the opportunity to analyze is in our own best interests. Sometimes we only learn by experience and the thing we learn is that we are rarely in possession of all knowledge and must take some things on faith. We have limits that structure our lives and that we mostly work within, push the boundaries of. We usually create our own limits in the abstract or in mundane daily life, and because we live in community always, we rub against the structuring limits of life around us.

​Legacy issues could be an imprint from other lives, karma. They can also be inherited tendencies in this life, repeating patterns from past karma or the patterns in life we participate in with others. We move in and out of many patterns all the time. Unconsciously we learn from those around us and move in sync with behavior patterns and their predictable conclusions from parents initially, connecting us to siblings, mates and associates.

As Life Goes By….

​Natal charts calculated as Progressed Charts account for the evolution in life starting from the time/place of birth and re-locating the chart in time, per day as life goes by. A Progressed chart sheds light on current patterns as if re-casting your natal chart for the current year. Because millions of us are born while major planets slowly move through a sign, there are generational commonalities presented to individuals that change when those major planets move into another sign, for another generation of sorts.

Within our Psyche Body, the Basic Blueprint Revolves and Evolves

​The placement of planets is relevant to our basic blueprint when we arrive on Earth, at birth. This natal chart is very revealing of the patterns and currents moving through our lives most of which are common to others born within years of us. How we participate and interact with those themes gets boiled down to a personal experience in the details mostly defined by the House Divisions, planets in the 12 Houses, more than in the 12 signs.
Moving forward from the birth day itself, day by day new influences come along as planets, asteroids etc. continue to move within the solar system, within our psyche body. It is a living thing and the parts within it continue to revolve, evolve and circulate; they do not remain static and end the discussion with the day of birth.

Planets Do Not Stand Still; really nothing does

​Consciousness on an Earthly level moves according to the context of Earth time as we orbit the Sun. Consciousness on other planes has its own habitat relevant sense of presence, of time. Our Earth-based awareness is presently designed with capabilities that present us all with common limitations of consciousness. 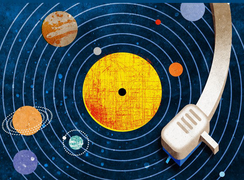 Holst - The Planets
There’s a constant shift of emphasis from influences within our psyche, within our solar system, like instruments in an orchestra over a musical score. They are all playing at the same time, with a changing emphasis according to the composition. We like to think that we are the conductor and it is true, we are. But in this case the conductor is an Earth consciousness that doesn’t have the awareness required to conduct all the other planets. We are working within limits. However, on another level our conscious being has access to awareness without these limits. The thing is to understand that the spigot into human consciousness works within limits, over time: Earth time.

​The common ground we share with others is that the outer planets which are the most profoundly potent have similar natures in us by the sign they are in when generations of us are born here.
​
The relationships of the planets in our solar system (in our psyche body) to our natal blueprint position of planets are the transits from daily planetary positions to our personal individualized natal blueprint…..all spread out as time passes. Not in a single moment. Our consciousness is a small container; it holds a few minutes of time hostage in which we dwell. Our imagination spans a longer period of time, but still has limits. A broader awareness spanning long stretches of time is available, and in the abstract is something more remote but occasionally inspirational. Our unconscious collects everything; often it makes notes and saves things we will get to later. A natal astrological chart attempts to map for reference a broad grasp of each individual in a massive collective, layered with multiple dimensions of consciousness from simple to abstract.