Astrologically, COVID-19 is a tool of Pluto
Plus: transits to the natal chart of Cuba

By David A. Wheatley
The natal chart for COVID-19 would be interesting to look at if we could establish a birth time and place.

Everything that has an inception time (a country, city, organization, person, you name it) has a birth chart. Sometimes the exact time of birth on a given day is hard to be precise about and Astrologers will accept 12 Noon as a birth time. A leader may write up an official statement at 8:30AM but not make the speech until 10:15 AM, Astrologers will use the 10:15 as birth time because that is when the baby went out into the world from the womb it was created in and began its life outside the body of the individual or individuals who may have spent weeks, months or years creating it.  An organization is born when the charter is published as a legal document, not when the dozen or so people drafted the articles.
​
Countries are born and after years, decades or centuries go through radical changes in the organization of their governments, they are reformed, reborn. Sometimes the names remain the same, marginally edited, or completely changed even though the people who resonate by birth with that place remain essentially connected to the same root culture. 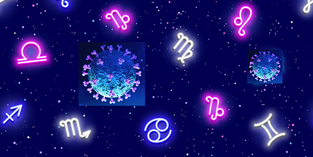 Covid-19 was born and continues to evolve into variations of itself. But it remains essentially Covid-19. We could do birth charts for the variations once we pinpoint their inception, or note with a progressed Covid-19 chart the moment of their evolution.

One thing I am sure of is Covid-19 came with a wave of Plutonic energy as Pluto worked its way through Capricorn. Analysis is complicated by the participation of Saturn and Jupiter whom also transited through Capricorn to rendezvous with Pluto in January of 2020. These three planets and others joining in January of that year - Mercury and Mars in particular - brought something to the forefront that Pluto had harbored in darker unseen underworld chambers of the psyche. Saying this, I mean the psyche of mankind harbored and created it indirectly.

It took years for Pluto and Saturn (the slower moving planets in the group) to meet up in late Capricorn. They cast their shadow ahead of them as Covid-19 showed up in the last six months of 2019 before it was recognized, but it was born when we named it and consciously acknowledged it.

This came about in stages like waking from a heavy sleep. Stories emerging from China and public statements from the W.H.O. were largely dismissed by the leadership in the USA until people began to die in larger numbers as the months passed.

Everyone is familiar with the tendency to wishfully think Covid-19 as finally being over. The bigger picture than the US media tells is that while most of the public in the US considers Covid-19 to be on its way out, the majority of the world still struggles with high and increasing numbers of Covid-19 cases and death, and the struggle to gain access to vaccines.

So far as looking at Covid-19 and its astrological character to determine a trajectory and hopefully it’s fading away, we need to keep our eye on Pluto which remains hovering around the same degrees in late Capricorn this calendar year and beyond.
​
Astrologically, Covid-19 is a tool of Pluto, and Pluto will remain caught in this theme at the end of Capricorn until November of 2024. At that time Pluto changes signs and moves into Aquarius.

​Pluto transiting the natal chart of Cuba has been going back and forth over the natal placement of Saturn. This is a tough combination of forced restriction, denial and stress, all intended to create the necessary pressures for a change that won’t come about easily because these two planets do not have a warm compassionate perspective in our psyche. They are supreme editors, and their only interest is in cutting away the obstructions to growth that they probably had a hand in creating somewhere in the past. It’s all a pathway to life but sometimes life only comes with a painful birth.

Transiting Uranus, the planet that relishes bringing change, is in Taurus a Fixed earth sign. This is an incompatible combination, a major planet of flux in a place oriented towards being unchanging. The result of the stresses between them is that change will occur, but in the style of Uranus, suddenly. Revolt will come instead of peaceful transition. Uranus transiting through Taurus is approaching a conjunction with the natal placement of Mars. Sadly this chemistry will and is producing violence on the way to bringing change. The arrival of Uranus to Cuba’s natal Mars is in the summer of 2022, implying a year of upheaval and confrontations.

In the natal chart of Cuba its natal Mars is opposed by the natal Moon. This natal combination most importantly taps into deep subconscious feelings on all sides, old patterns established in the past that are repeated.  We’ve seen it before, we’ll see it again.
​
David Wheatley
July 2021