Another Chart Worth Looking at Now is Yellowstone Park

By David A. Wheatley
There’s a bevy of Youtube videos pronouncing a major eruption there, leading to a prolonged global winter, death and havoc for plant and animal life on Earth because of lack of sunlight, but at least for a few centuries postponing a warming planet.

Yellowstone erupts periodically.  It has had at least one major eruption on such a dramatic scale, in addition to many less catastrophic eruptions making only local impacts.

Part of the expectation that a major eruption is coming soon is the belief that this information has been known for decades and secret government money is building survival cities underground. And that the agency responsible for collecting and publishing seismic information is either withholding or altering some of it. Seismic activity waxes and wanes for much longer than people live; it is easy to suggest a groundswell or the shallow level of magma is a sign of an eruption in Yellowstone. There are many conspiracy theories purporting the premise of widespread surface world destruction and secret monies investing in underground facilities. 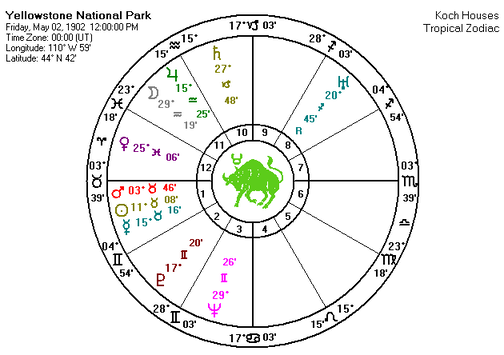 Strictly limited to Yellowstone, I would refer to the astrological chart for the park to learn if there is anything coming up that supports a major event of transformation to something very different if not hostile to the park as we know it now.  If there is such an astrologically supported event, when is it?

Yellowstone has existed without the names familiar to contemporary Americans or before that by Native Peoples. The only way to cast a chart for the park is beginning with the official declaration of it as Yellowstone National Park, the first national park of the USA. The discussion that preceded its declaration is not the point at which a birth chart is cast. The birth date by official inception was announced by government decree on May 2, 1902. On that day it entered public consciousness as the birth of a national park.

So the question is:  are there any astrological periods using the natal chart for this date and place coming soon enough to give the many Youtuber predictions a shot at being right?  The quick answer is:  yes there are.

There are reports about increasing seismic activity in Yellowstone Park in recent years, swarms of quakes, groundswell, even in recent months. We read and hear reports that agencies reporting seismic activity are not reporting it all, followed by speculations on why. Whatever the reasons are, they all feed into conspiracy thinking that some authorities know more than they are telling, and in the case of Yellowstone they know that it is going to erupt in a big way. I do not believe any government agencies we know of have any way to possess this knowledge. It’s not surprising that so many people have these ideas, do not trust their authorities after decades of the authorities only telling people the truth when it suits them.

But anyone can consult an astrological ephemeris to see for themselves if there are any astrological factors supporting a life altering event.

​An eruption is a Uranian event, as are earthquakes - the sudden release of explosive energy, as in old material long hidden from sight regenerated and utterly transformed. Eruptions are especially potent when combined with Pluto, the metaphorical underworld, indicating hidden energies stored under pressure for a long time that suddenly come to the surface.

Such an interaction takes place mid 2022 when Uranus by transit moves into conjunction with the placement of natal Pluto in the Yellowstone Park chart.

Uranus and Pluto move slowly and all slow motion of planets creates an increased focus of their particular character of energy. Long before Uranus arrives at the exact degree of Yellowstone’s natal Pluto, transiting Uranus is interacting with the natal one in time and space. Pressures will be building, tensions increasing during this period of time, seeking the opportunity to be released.

Usually another planet, often a planet inside the orbit of Jupiter, is the catalyst for the release of tensions. Uranus will also oppose the position of Yellowstone’s natal Moon around the same time, and strike a decisive angle to natal Saturn. Other inner planets transit into and out of this same series of aspects over several months of interaction, during which time pressure within the Earth is building. Transiting Mars notably is a likely catalyst; expressive Mars can be explosive or violent when in a tense aspect with Pluto or Uranus.

Other transiting aspects to natal planets in the coming year or two support the amplitude of a major event in Yellowstone. Transiting Neptune will meet up with natal Venus. On approach this fuels loading the chamber with tremendous pressures from water, heated, as steam. There is a groundswell on the lake bottom of Mary Lake, discovered in 2017. The pressure has distorted an area on the lake bottom over 2,000 feet long and 100 feet tall. This phenomenon has been and is occurring at Yellowstone Lake in recent years.  Neptune’s transit to Venus in the natal chart puts in place the kind of substance to fuel a great blow off of steam at least. This kind of rapid expansion from water into steam (because of contact with magma) can spur an enormous eruption.

Transiting Pluto remains critically at the latter degrees of Capricorn as it has been for a couple of years, through 2024. While doing so, relevant to the Yellowstone chart, it conjuncts natal Saturn. These two planetary energies can tear down and reshape a landscape. Saturn focuses on creating and removing the blockages to the flow of energy regardless of the cost or consequences. Pluto has an even larger appetite, building slowly unseen in the depths of the world or the psyche to an inevitable release and transformation of the face or surface of things. This is definitely a period of profoundly potent forces building up for breaking of tensions in the Yellowstone chart.

These aspects support something out of the ordinary that is powerful, thoroughly transformative, disruptive and violent in the Earth and in our lives. I would describe it as a major event with escalating quakes in frequency or potency, beginning several months ahead of next summer. It is possibly a part of a wider series of events including locations well outside the Yellowstone area. This review is focused on Yellowstone. A wider review on other locations might or might not support a major seismic event in adjacent areas.

If you live where these things happen it is bad news. But it’s not the end of the world as we know it.