Looking at a personal astrological chart people usually associate with one of the Sun signs from birthday and month. To make a natal chart more specific for an individual soul entering a human fetus to be born, this happens in a local time zone.  This local time is converted to the Earth time, Greenwich Mean Time.

A natal chart isn’t very useful if it’s cast for the whole planet, which is what a sun sign chart is:  Everyone born on that day everywhere on the planet. The natal chart casts it for the individual’s specific time of birth at a specific place on the planet, with Earth in a specific location/time in the zodiac in relation to the body of planets and asteroids, the body of the Psyche.

A natal chart printed on paper can be held up over your head and aligned with the points on the compass to map the position of the planets, moon, asteroids and abstract points of interest in the sky at the specific time of birth. This natal map shows angular relationships of planets etc to each other which represent focal points that form their own internal relationships and chemistries within a natal chart. A natal chart is a wholistic organism made up by the material in it on the physical plane, for the whole individual.
Planets, Moon, Asteroids and other points of interest on the astrological chart are not external.
Most students of astrology begin to describe how these planets and their angular relationships affect each other and shape a person’s life. But the planets are not external objects making us do things. They are us. They are the organs, sinew and vital blood in the organism called a natal chart, and also called the Psyche. Mapping the planets and their relationships to each other is all about us affecting us. It’s an internal process, not external.

Planets do not force us to do anything any more than your knee forces you to walk. But if we remain largely unconscious of our own body, our psyche, it sets about creating circumstances for us to grow and learn what we need to. To the extent that we are unconscious creatures we are astrologically predictable.

People are creatures of somewhat predictable behavior when they are unconscious of their motives. They make choices for reasons that could be truths or lies one tells oneself.  If one doesn't get it right the psyche makes sure we get another shot at it. These repetitions can become patterns, phobias and Karma.

From the point of view of an average astrologer or psychotherapist about their clients who are people living unconsciously, this is comforting, because their predictions will usually work out as they predicted.   But we are not all here to be windup toys who live in the grooves and ruts of similar unconscious choices over and over, unless we have to. Discomfort or outright suffering prods us to seek refined paths. If repeated, new routes can become a pattern. Successful patterns included. Patterns can be wonderful.

The quality of a decision will benefit from an open eyed honest review of the background factors. A natal chart gives us the beginning of understanding context, history and influences. Consequences perceived in the reader’s intuition can follow the astrologically predicted tangent to its likely conclusion.
Our Earth consciousness is like the Earth itself, a living clock, as regular as the Earth turning on its axis and in orbit around the Sun. This is one gear in a celestial clock.
But the natal chart begins to describe something greater than physical gears in a clock.
​
When you are born into a human body, citizen of Earth, you are born into the Solar System, not just into a place on one planet.  The chart maps ALL THE PLANETS, at least all the planets we know.

The Earth is a part of the solar system, the psyche-body, and its existence has always been dependent on the whole system behaving as it does. Yet we humans don’t refer to an astrological relationship within the solar system at birth because the scope of vision among us is local and narrowly confined to the village we came into life at.

In fact the whole organism of the solar system is there to host us at birth, and to host the individual and collective psyche which we map on a natal chart. When the timeless individual psyche or soul enters a physical body, it establishes a connection to the developing physical brain.  It doesn’t lose its connection to the other planets or their other dimensional essences. They go unconscious and we spend a lifetime working on these planetary relationships.
A natal chart shows the planets and other celestial system characters as properties in the psyche. They are not just physical properties; they are psyche-properties or psychological properties.
The Solar System body has organs and components with subtle bodies wherein the essence of life emanates. We chart the physical planets, yet some astrologers cite the essential values of the planets without being aware that they are talking about profoundly more powerful subtle forces than physical. These forces are more psychological than physical.

Earth consciousness typically is very local and immediate. On Earth, the sunlight we depend on for survival is present for half a day more or less; we don’t have much time in this clock.

A few hundred years ago we lived within the illusion that the Sun, Moon and any planets circled the Earth. Finally we were liberated from this illusion by physical science which pierced the fog and demonstrated that Earth is one of many planets revolving around the Sun, so in some way the old Sun worshipers felt their stock was rising once again.

But it turns out we need to again redefine the relative value of what is revolving around what, because in psychological terms we here on earth have a very hard time perceiving reality as being not centered on Earth. Psychologically we still largely believe that all of creation still revolves around this planet.

Well it’s true, as true as it would be for anyone experiencing life in this delusion.  A more accurate perspective is that this is still an illusion; we make it so, blocking out the greater reality by considering that the realm of the psyche is a dream world when in fact the one we are living in/on is a product entirely made and managed by the psyche. The order of importance is completely reversed.

And therein is our dilemma.

Meanwhile, back in the drama called life on Earth, though human consciousness is on an individual basis approaching a waking moment, the multiple delusions of what reality is are anchored to various common states of human psychology. The planet as a living organism within the solar system labors on the border of massive species die-off because of our steadfast adherence to collective delusions, wrapped up in our own importance.
If you begin to grasp the significance of the solar system as an organic body of a timeless psyche, you understand the threads of why a natal chart begins to place us as individuals into a more real context as celestial beings. 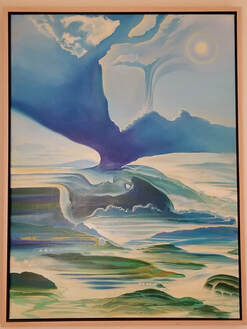 Photo: Metatron © by David A. Wheatley
The Earth mind reels at this suggestion, thinking that the sheer size of the Solar System makes this proposition absurd. However those are the conclusions of thinking restricted by physical dimensions, restricted by the belief in physical reality being THE reality.

This is a planet-wide condition that requires psychological help.

There is much more than physical reality to the whole body of the Solar System and everything else.  There is multidimensional consciousness which includes that which is within the physical universe but not restricted by it. We do not have conscious access to more dimensions because our species is conditioned by its history of living within familiar patterns on this planet that has created its own weight of importance. Because it’s always been this way it must be right.  Because we can trace our ancestry from the cave man it must be right and we are obviously the best version of it.
Don’t be intimidated by the size of the solar system when I say that this body is what plays host for the psyche at birth. The size of physical matter is relevant only in the physical dimension, in the superior reality of the psyche where there is no time or space, the whole thing is the size of a dot.

These scales of measurement and their values are only applicable to a mind limited to Earth scale consciousness. Yes it’s the local yardstick, and quite useful. It’s designed to be this way.

But it’s only one small slice of a much larger pie. Up to now we were told it was the whole pie.